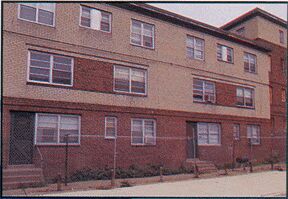 Now that my tweeting career is in hiatus status (I’d say permanently, except for the fact that I never say never- unless it’s to tell you that i never say never), I can get back to what I’m almost famous for- THAT REAL SCHITT. It’s about time for some more Philly random rap up in this piece, so here’s a little known gem courtesy of some cats that go by the name of 24-7. Early 90’s schitt, kind of a proto-Roots flavor going on here. I can’t even tell you any more about this record because I sold it on Ebay a few years ago- I scanned the labels but lost ’em when my external hard drive went on the fritz. So if anybody has any info on these cats let me know- this was a real nice record IMO.
BTW, I don’t know if 24-7 were actually from Richard Allen projects in Philly (they name check Richard Allen but also seem to be claiming West Oak Lane, which is a whole different neck of the North Philly hoods), but lemme tell ya… back in the days before it got imploded and replaced with pretty new houses, Richard Allen was one of the most feared landscapes in the city. Seriously. Home of the Ram Squad (another legendary local rap crew, known for giving studio engineers unaccustomed with dealing with real live street folks a bad case of the pissy pants), Richard Allen used to be one of those places that outsiders did NOT want to be anywhere near after dark… boy, some of the stories I have heard. My mom actually lived there way back in the days, around the time that one of the most famous Philadelphian’s of them all, Bill Cosby, supposedly grew up there as well. Yet neither Mom or any of my uncles or my aunt ever recalled anybody named Bill Cosby living in Richard Allen- as my Uncle Wendall used to say, “We knew EVERYBODY in Richard Allen, I don’t remember no Bill Cosby… unless he was some little punk who stayed in the house all the time.” Yeah, my uncle was kinda gangsta… maybe Bill was a shook one, I dunno. Or maybe he was just always chillin’ in the junkyard with Mushmouth and Rudy and them- I’m not gonna deny the Cos his street cred.